For years we have been guiding people over the mountains of Snowdonia and I love regaling people with the folklore that lies behind the mountains’ names. And Snowdonia has some terrific folklore and mountain names linking a rich tapestry of legend and history. 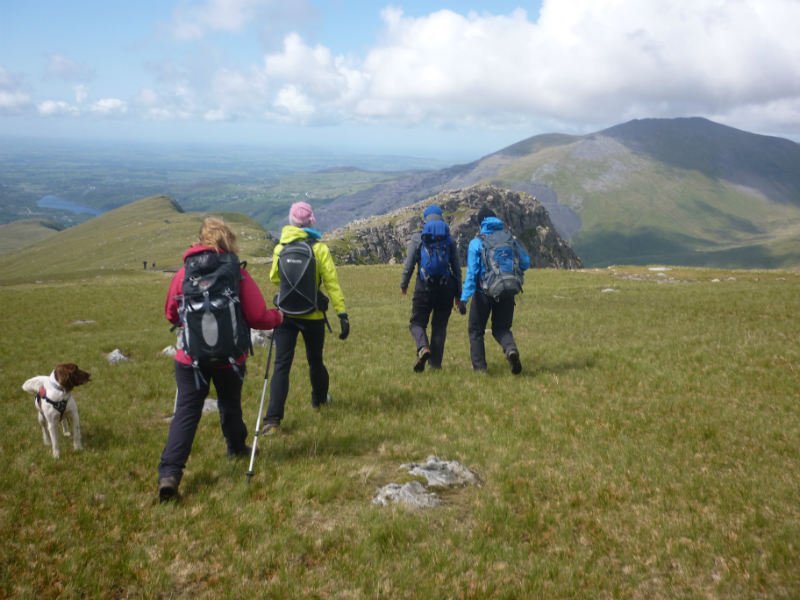 The biggest and highest of the Welsh mountains. Snowdon is the English name (from old English) simply meaning “snow hill”: there’s no fun in that! The Welsh have a far better name for their highest mountain Yr Wydffa. This translates to ‘the tumulus’, or burial mound if you like … So why’s that interesting?

Rhitta Gawr was a giant who believed he could dominate all of Britain because he was so big and strong. He led an army of giants, and one by one the kings of the land fell to him. As he vanquished each of his foes, he’d rip from their faces their blood-stained beards, (the sign of their manliness), and gradually Rhitta Gawr wove for himself a cloak: a cloak of beards.

The day came when there was only one king remaining who had yet to yield to his power, and that was King Arthur. Arthur marched his army to meet Rhitta Gawr, and at dawn on Wales’ highest mountain fought one on one with this menacing giant. With the mighty sword Caledfwlch, (Excalibur), Arthur was able to eventually slay his foe with a blow to his head that split the giant’s skull open. Rhitta’s followers, seeing that their leader was dead retreated back to their caves and dens leaving Arthur and his men to bury the giant and his cloak under a pile of rocks (the tumulus).

This place was named Gwyddfa Rhitta (Rhitta’s tomb) which over time has become Yr Wyddfa. A much better telling of this tale can be found on Legends Of Wales.

More correctly this should be Carnedd Ugain – carnedd meaning cairn but normally being associated with mountain. It is also known as Crib-y-Ddysgl, which strictly speaking is the east ridge that leads to the mountain’s summit. Crib-y-Ddysgl means ‘the ridge of the dish’ – which is easily seen when you think of this ancient volcano crater as being like a huge dish.

The summit name, Carnedd Ugain means Cairn of the Twenty which is thought to be derived from the Roman fort in Caernarfon. Reading through these ancient tales we also learn of the Peredur meaning a number of men from the history and legend of sub-Roman Britain. Could this be the Twenty? 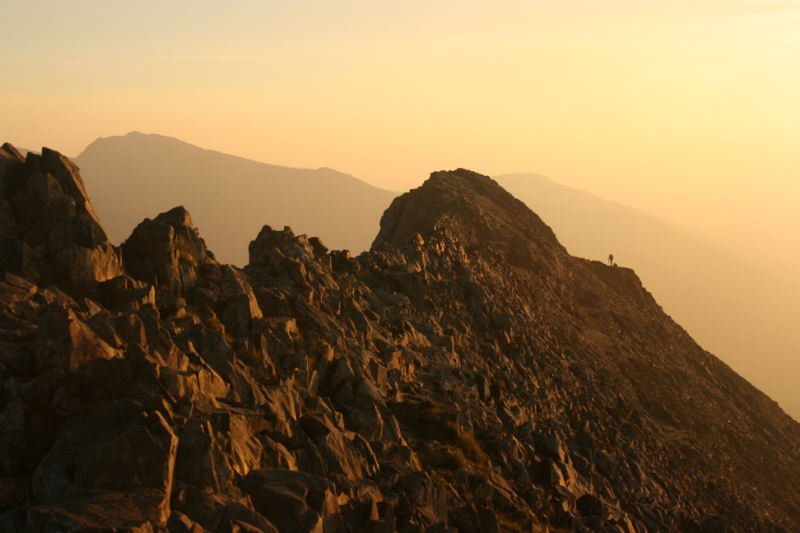 That infamous traverse is simply named Red Ridge. (Crib is a word you will often see on the maps of Wales and this means ridge).

“Big Elidir”, or Eliffer Gosgorddfawr (‘Eliffer of the great army’) was a legendary warrior king of the mid-6th century who was said to have reigned undefeated in his battles including those commonly fought against the Angles. He was the son of King Arthuis, possibly a contemporary of King Arthur.

This is the tenth highest mountain in Wales, and shares its summit’s name with at least three other hills within the country. (Including Y Garn of the nearby Nantlle Ridge).  Y Garn simply means the cairn.

(Big Glyder and Little Glyder). The Glyders are the two main mountains of the Glyderau mountain group. Glyder derives from the Welsh word Cludair, meaning a heap of stones. Between these two ‘heaps’ lies Castell y Gwynt – ‘Castle of the Wind’.

Y Garn and the Glyders bound the dark north facing cleft in the mountainside known as Twll Du (black hole) – ie the Devil’s Kitchen. From here, on occasion you will see plumes of mist ascend up the mountainside like smoke up a chimney. Hence folk lore talks of when steam is rising, the devil is cooking! Also are stories of ancient druids creating lightning bolts to keep the Romans away, and these bolts causing the plumes of smoke.

Looking at Tryfan with Llyn Ogwen 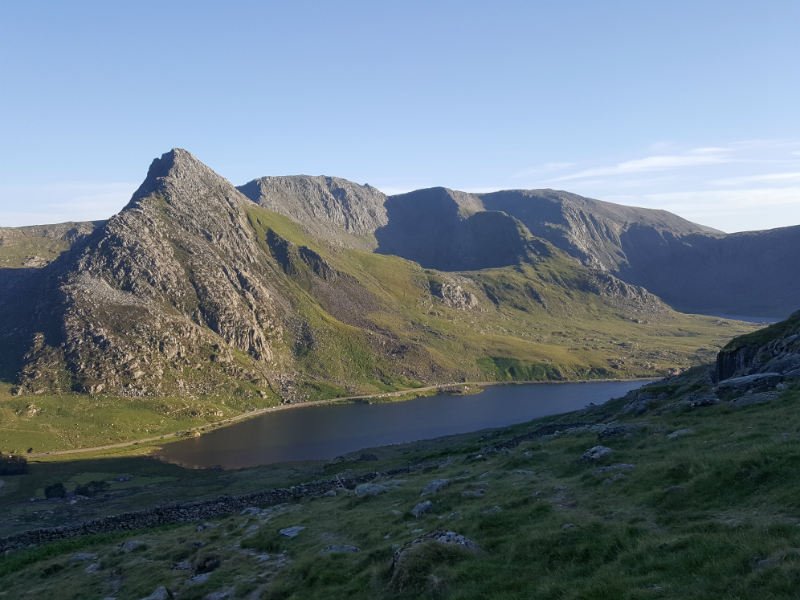 Tryfan means ‘three fingers’, and if you look at the mountain’s east face you may be able to discern these three fingers.

The mountain is also linked to Arthurian legend. Arthur is said to have fallen or been fatally wounded at the Battle of Camlann where he faced Mordred. Rather than allow his sword Excalibur to fall into enemy hands, Sir Bedivere (one of the Knights of the Round Table) cast the sword into Llyn Ogwen, (where it was caught by the Lady of the Lake). Following his death, Tryfan is said to be Bedivere’s final resting place.

Pen in Welsh means head – and so we have here the ‘head of the White Slope’.

These two mountains are named after Welsh nobility. Possibly they have been names after the two last (true) princes of Wales, but possibly named after Llywelyn the Great and his son, Dafydd ap Llywelyn. Carnedd Llywelyn (‘Llywelyn’s cairn’) is the highest mountain in the Carneddau range of Snowdonia’s mountains. I like to think that it was named after Llywelyn the Great who was a prince of Wales, but through guile, war and diplomacy became Wales’ defacto ruler for some 45 years.

Elen was the daughter of Llywelyn the Great, (and grand-daughter of King John of England) which makes sense with the above. We have Llywelyn in the highest, his son Dafydd on the next peak down and then his daughter lower still. If Carnedd Llywelyn is named after the Prince of Wales, (Llywelyn the Great’s grandson), Elen could be short for Eleanor de Montfort, who was his wife and accordingly the Princess of Wales who died in 1282.

This is the next mountain in line as you progress along the Carneddau. Most uninspiringly, this translates simply into ‘Scabby Hill’. (Foel is hill).

If you take the view that Carnedd Llywelyn is named after the last Prince of Wales (and last ruler of Wales), then this mountain renamed in 2009 links in nicely with this family group. Gwenllian is the daughter of Llywelyn, Elen (or Eleanor) is her mother, and Dafydd is her uncle.

As for Carnedd Uchaff – this means the highest cairn. (Which doesn’t make a lot of sense, since it isn’t! Though it does look like a big heap of splintered rocks).

No legend here – just ‘broad hill’. If you’re completing the Welsh 3000s Challenge though – it’s a summit you’ll be pleased to see! (It’s the last one). 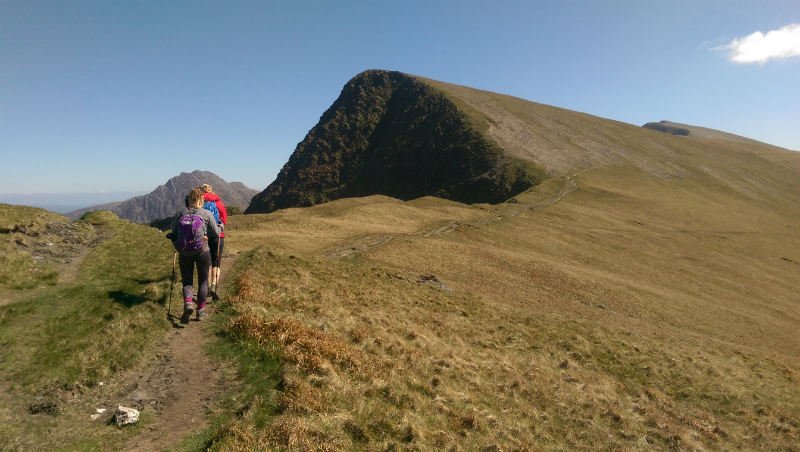 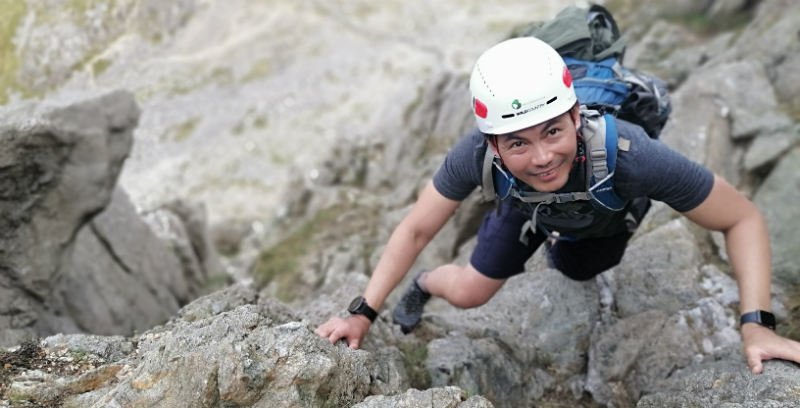 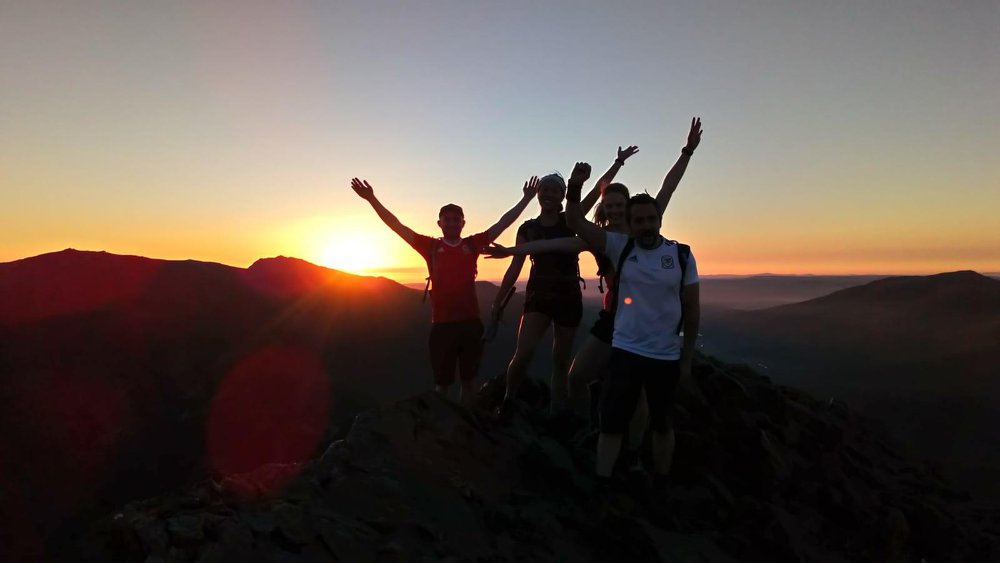 Overcome Your Fear of Heights Courses