Scrambling Starters – What is Scrambling?

You are here: Home1 / Advice2 / Articles3 / Scrambling Starters – What is Scrambling?

What is scrambling? In short, scrambling is exciting, it’s airy, it’s exposed, it’s exhilarating, and most of all it’s simply a GREAT way to ascend a mountain. It is almost easier to describe what it isn’t. It isn’t just hill walking, it isn’t as technical as rock climbing. Scrambling lies in that grey area between hill walking and rock climbing. It is where you head out to the mountains equipped for a day of walking, but you look for lines to the tops that will allow for some clambering and climbing on the rocks – but hopefully nothing too hard.

Scrambling on Crib Goch in Snowdonia

Scrambling is the territory that lies between hill-walking and rock climbing. Scrambling requires you to ascend a mountain or a hill using your hands to climb short sections, as well as your feet to walk: hence It’s definitely more than hill-walking. However scrambling is not quite technical enough to be rock climbing and for the easier grade 1 routes the moves aren’t too hard and you shouldn’t need a rope or any of the equipment needed for rock climbing.

Scrambles are graded 1 – 3, with grade 1 scrambles being at the easier end of the spectrum. Normally these are easy to follow and to climb. If you’re having a bit of an epic these routes shouldn’t be too hard to escape from. That said escaping from classic grade 1 routes such as Tryfan’s North Ridge or a traverse of Crib Goch could prove difficult and more dangerous than sticking to the route.

Grade 2 scrambles will involve some harder moves  and will in general be more committing. Inexperienced scramblers who may not be so confident at height or not so sure-footed may prefer some of the moves to be safe-guarded by a rope.

With grade 3 routes you should expect the whole shebang! Go out and expect the route to be hard to find, hard to climb and do expect to need to rope for the crux moves.

Grade 2 and 3 scrambles also tend to involve a lot of decision making the whole way and so care needs to be exercised on this ground. 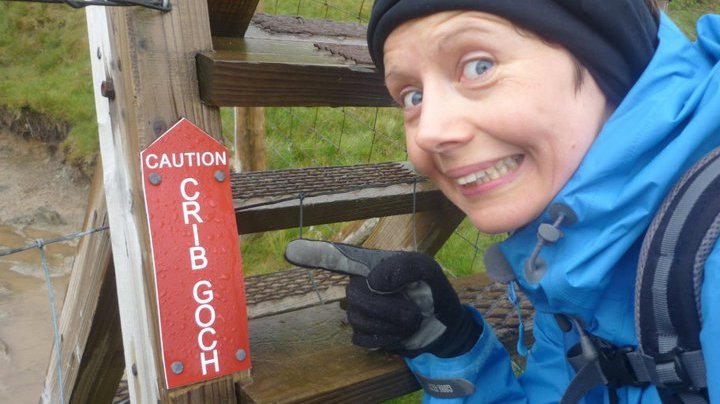 Beware though: with scrambling comes risk. If you’re not sure about which route to choose for that day, or you’re not sure about how to find it or how to follow it you can end up on dangerously steep ground that you’re unable to escape from. If you don’t have a rope and find yourself needing one the consequences of a fall can be catastrophic. If you have a rope but don’t have the skills to safely use it, again the outcome could be fatal.

For those early forays go with someone that has experience and knows what they are doing. That could be with an experienced mate, a local mountaineering club or of course with us!

If you have never tried scrambling, make plans to do so now! As well as being exciting, airy, exposed,  exhilarating, and a GREAT way to ascend a mountain, it’s also extremely addictive.

Join us for a weekend of guided scrambling

For those of you with a good head for heights, this is an exhilarating way to ascend a mountain offering high airy views and plenty of excitement. Perfect for seasoned walkers or aspirant adventurers!

Adrian Gostelow
15:50 13 Dec 20
An excellent two day outdoor first aid course delivered enthusiastically by Will who is very knowledgeable,... professional and friendly. Lots of outdoor scenarios to test and consolidate your learning. I would certainly recommend Will4Adventure!read more

Ron Blundell
17:28 11 Dec 20
Just completed the 2 day Outdoor First Aid course which was a joy to do on a couple of dank days in December. Socially... distanced, entertaining, interesting and professional. I thoroughly enjoyed and would highly recommend this course. Thanks Will, I've done other first aid courses where I've nodded off but not on this one!read more

Martin Hall
21:33 15 Nov 20
I attended the 2 day Outdoor First Aid course run by Will4Adventure on November 3rd and 4th. The tutors were excellent... ensuring the course was both interesting and informative. Scenario situations were well set up to ensure theory was put into practice. As a teacher that takes groups into the Peak District I left the course much more confident that I would be able to deal with First Aid incidents should they arrive.read more

Matthew Treece
07:57 29 Oct 20
Just had two days climbing in the Peak District with Will and had a great time. We had asked for a bespoke course to... teach us about rigging our own routes for top/bottom ropes and so Will designed us a two day course to cover what we wanted to learn. It was good fun and excellent value for the amount of tuition and supervision you get in a small group. I would highly recommend!read more

Peter O'Connell
06:19 23 Oct 20
I completed the fear of heights course a couple of weeks ago. Its a great weekend - fun, interesting, intriguing, and... challenging. Instructors are professional and very supportive. I've been playing with my fear since the course on some walks and while its still there, the anxiety levels have been dialed back a couple of notches. I'm happy with that and consider this money well spent. I'll be doing more with Will4Adventures.read more

Andy Gregory
20:55 12 Oct 20
I’ve just completed the “overcome your fear of heights” course and had an amazing weekend. I achieved things that... I never thought possible and enjoyed every minute. Professional, patient and knowledgeable instructors made me feel safe and confident at every step. I’ll definitely be back for more courses in the future. Thanks Will and team.read more

Lisa C
08:12 19 Sep 20
Fabulously knowledgeable and experienced team on hand to help you achieve your hiking / walking / climbing goals. ... Thoroughly nice bunch of people led by Will who is funny, kind and professional in equal measures. Update Sep 2020: Just completed a fabulous 'family day' experience in the Peak District with Will4Adventure. We got to sample bouldering, climbing and abseiling under the watchful eye of Adam who patiently nudged us out of our comfort zones. We got a confidence boost, improved on our skills and most importantly - we had fun! Can't wait to do it again.read more

Alex Metcalfe
07:25 18 Sep 20
I had a great 2 days on the Outdoor First Aid course with Stu from Will4adventure. Stu's passion and enthusiasm on the... subject matter, which could be quite heavy, was infectious helping to keep me engaged. Great work guys. Definitely recommended!read more

Rachel Johnston
06:18 18 Sep 20
A really thorough and practical Outdoor First Aid course, delivered efficiently and with energy and enthusiasm over the... weekend. I feel much better equipped to deal with situations that could arise now. Thank you!read more

Kerri-anne Collins
07:20 27 Aug 20
I've had many an adventure with Will4adventure, climbing weekends, Welsh 3000s, walking weekends, scrambling weekends... and even a trip organised by Will to the Himalayans. Each trip I've absolutely loved and if it wasn't for Will I don't think I'd have caught the adventuring bug. His enthusiasm for what he does and his warmth is genuinely infectious. He's very professional but also very inspirational too. I've met lots of good friends on his weekends and many like minded people. It will leave you buzzing for weeks spending a weekend with Will and his friends.read more

Wendy Johnston
07:17 27 Aug 20
It is nearly 8 years now that i completed Will's wonderful fear of heights course. It has enabled me to do so much more... in my life than would have ever been possible before. Last year I was able to trek to Annapurna Basecamp, with all the associated suspension bridges, and only yesterday, was at the top of a step ladder clearing foliage from upstairs Windows, no mean feat when previously I could only go up 2 or 3 rungs !read more
Next Reviews

While we still can we've taken the opportunity to

Many years ago, as a young man in my twenties, a mate introduced me to scrambling. I had no clue what it was or what it involved, but he was a good lad and it was a weekend in the Lake District and so it sounded like the sort of lark I’d enjoy.

We cut our teeth on the infamous, though in reality, very friendly, Striding Edge that led us to the summit of Helvellyn. It went so well that we were in fact back at our car by lunchtime. Idly flicking through his guide book my mate then suggested we tick off one more route to make best use of the daylight remaining that day: and so off we went to St John’s in the Vale for a grade 3 epic named Sandbed Ghyll...

I had no idea what I had agreed to or what lay ahead, but what transpired was three or four hours of near death scrambling up a Lake District ghyll which to make matters worse, was in spate at the time. Once established on the route, we were committed, and while my mate blithely led the way I felt every perilous step would be my last. I confess, I was terrified the whole way up, wondering what on earth I was doing on such a route. This is not the baptism by fire I would recommend for newcomers to this great sport, and so now I’m a bit older and wiser, I share with you dear reader, some pearls of wisdom gleaned over those years...

Good to know you have “moments” too Will x

Well hello!! I recognise the people in that photo William Legon! You introduced us to scrambling. Bloody brilliant! x

Congratulations to Stuart King on being presented with a Royal Humane Society Award for his swift action in saving a climber's life on Creag Meagaidh last winter. The article in Grough mentions Stuart carrying out lots of the good practice we teach in our Outdoor first aid courses.

That's where I fell the full length of a rope but miraculously escaped without injury but gained the nickname Freefall.

This site uses cookies to help provide a better user experience. By continuing to use the site you consent to the use of cookies. Find out more.